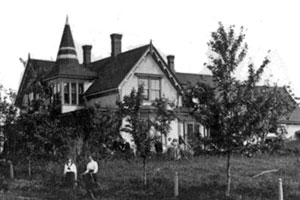 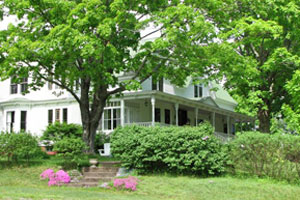 The house was built in 1890 by David A. Huntley, merchant and lumberman, on land purchased from Hugh McGilvray (land originally owner by the Davison family).  It was retained in the Huntley family until 1908 and it is said the first telephone exchange in Parrsboro was located in this dwelling and operated by David’s wife, Josephine.  Lumberman and trader Albert C. Elderkin became the next owner, and then the house was sold again in 1937 by his wife Lucy to Maureen Gillespie, wife of Harry.  Since leaving the Gillespie family in 1976 the property was owned by Stephen M. O’Regan, Sylvie Bertin, Lowell and Geraldine Phillips and Shirley Cormier.

Shirley Cormier purchased the property in 1990 and established the Gillespie House Bed and Breakfast which she operated
until June of 1997 when Lori Lynch and David Beattie acquired the property.

In 2003 significant expansion and renovations were completed transforming Gillespie House Inn into a
41/2 star Bed & Breakfast Inn offering 7 comfortable guest rooms, all with private bath.
Gillespie House Inn is a member of the Inns of Nova Scotia.

Lori discovered this picturesque shore of the Bay of Fundy in May 1997 while looking for just the right place to follow her
dream of owning an historic home and operating an Inn.  It was love at first sight.  We moved in early June and
ten days later hosted our first guests.  We were very nervous, but thankfully they were a
lovely couple from Maine who were very gentle with us and easily pleased.

Things have changed quite a bit since our first season.  Our first major renovation was to add three new bathrooms
upstairs and to convert two small bedrooms into a suite.  More changes came in 2003 when three new
guest rooms and the front veranda were added.  But our favourite part is still the wonderful people that we meet.

We were both born and raised in Fredericton, New Brunswick, where we have lived most of our lives.
From 1992 to 1996 we lived in Halifax and came to know Nova Scotia. We then returned to Fredericton,
where we still have a home and spend our winters.

Lori graduated from the University of New Brunswick with a degree in Forestry.  After spending a year in
New Zealand and Australia, she worked briefly for the Province of New Brunswick in seedling production at the
Provincial Tree Nursery in Kingsclear.  She also worked in Real Estate while living in Halifax.

David graduated from the University of New Brunswick with a degree in Civil Engineering and is
retired from an engineering career with ADI Limited.


In 2013, Lori and David opened BlackRock Bistro in Parrsboro, which they operated for six years until October 2018 when the Bistro was purchased by new owners. In 2018 they became founding co-owners of Two Islands Brewing.

We enjoy traveling in the off season to destinations where we can trek and hike. Recent travels have taken us to Antarctica, Morocco, Rawanda, Argentina, Peru, Nepal, Bhutan, Myanmar, Egypt, Kenya, Tanzania, Spain and Portugal. We enjoy trekking
for several days in the mountains passing through remote villages and ascending mountain passes.

Our family includes Abby and Piper who you probably met when you arrived, "the official greeters",
no longer puppies, but still just as friendly. 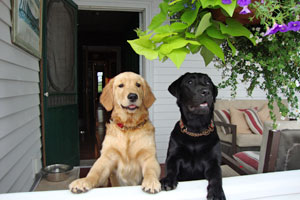 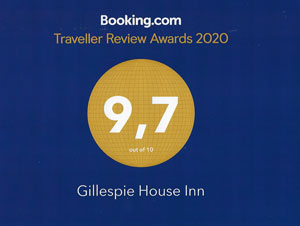